The 1909-S VDB Lincoln cent is one of the most popular United States coins. This popularity had led it to become the most commonly altered and counterfeited collectible coin in the world, according to submissions to NGC. For a counterfeiter, the addition of a simple, small design element (an “S” mintmark or “V.D.B.” initials) can make a very cheap coin appear to be worth hundreds, if not thousands, of dollars. The frequency with which these forgeries are seen makes it essential to thoroughly inspect any 1909-S VDB Lincoln cent. 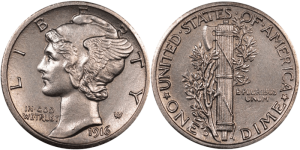 The 1916-D is the famous key date in the extremely popular Mercury Dime series. This popularity has resulted in significant values. The Philadelphia 1916 is quite common and affordable in comparison and this gives a counterfeiter the opportunity to add a tiny “D” mintmark to make it appear to be the rare 1916-D. In addition to added mintmark fakes, complete counterfeits are also frequently seen. 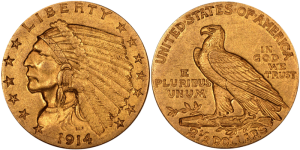 The 1914 Gold Quarter Eagle has the second lowest mintage in the Indian Head series after the elusive 1911-D issue. Only 240,000 pieces were struck, and today they are highly sought by collectors, especially in uncirculated grades. Unfortunately, there are also a lot of counterfeits of this date. Many of these fakes have been in the marketplace since the 1960s and continue to deceive collectors and dealers today. While not quite as desirable as the 1909-S VDB, the 1914-D Lincoln Cent actually has a smaller surviving population. This makes the 1914-D a prime target for counterfeiters. The most commonly seen fakes are outright counterfeits, but added mintmarks and date alterations (usually from 1944-D cents) are relatively common as well. 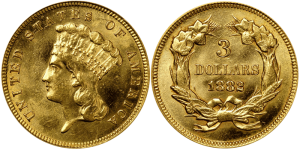 The most commonly seen 1882 $3 Gold counterfeit is one produced by the so-called “Omega Man.” The calling card for his fakes is a tiny Omega symbol. On this particular counterfeit, the symbol is found inside the loop of the “R” in LIBERTY. These were likely created in the 1970s in order to deceive collectors 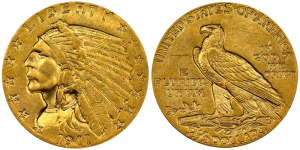 The 1911 $2.50 gold Indian is actually one of the most common dates of the entire series with a mintage of 704,000 pieces. However, the numismatic value still far outweighs the intrinsic value of the gold. Counterfeiters have seized upon this difference to make fakes that are actually the correct weight in gold, but are fake nonetheless. It is believed that many of these fakes likely originated in the Middle East in the 1960s. 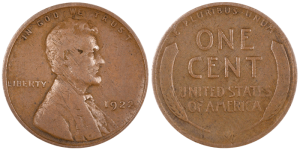 The Philadelphia Mint did not strike any Lincoln Cents in 1922. However, an overzealous Denver Mint worker over-polished some dies, leading to 1922-D Lincoln cents which have had the mint marks removed. While the 1922-D Lincoln is relatively common, the 1922 No D is much more scarce and valuable. Due to this value difference, an unscrupulous person can efface the D from a coin and make the coin appear much more valuable. 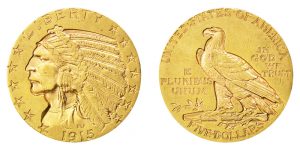 The 1915 $5 gold Indian had a mintage of just under 600,000 pieces. With this large of a mintage, it is a relatively common Indian half eagle. However, higher-grade examples of this date are still worth much more than the value of the gold in the coin. Due to this difference in value, counterfeiters have created many fakes in order to deceive collectors. 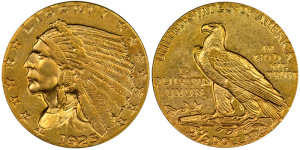 The 1925-D gold quarter eagle is another example of a common coin that has still been extensively counterfeited. This date had one of the higher mintages of the entire series at 578,000 coins. As was the case with a few of the gold coins higher on this list, these fakes were often made in order to deceive collectors. The famous key date Morgan dollar rounds out the top 10 counterfeits most commonly seen by NGC. With a mintage of a mere 100,000 coins, this coin is worth well into the five figures at every grade of AU 50 or higher. With such huge profit potential for counterfeiters, 1893(-P) coins are often sacrificed in order to create an 1893-S. Nearly all of the fakes seen by NGC graders have had “S” mint marks added to Philadelphia coins. Outright counterfeits are sometimes seen at NGC as well, but are usually not as deceptive as the added mintmark examples can be. 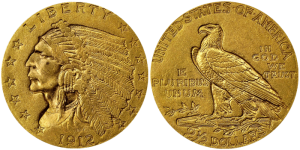 With a mintage of 616,000 pieces, the 1912 $2.50 Indian is another common date in the series. It is also a date which was extensively counterfeited in the 1970s. Many of these old fakes, which are usually of the correct weight and gold content, are still submitted to NGC for authentication and grading today. 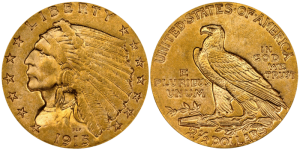 The twelfth coin on our list is very similar to coin 11. The Philadelphia Mint struck 606,000 quarter eagles in 1915, making this another common date in the series. However, NGC has received a large number of fakes for this date as well over the years. Many of these counterfeits have been seen in the marketplace since the 1970s. 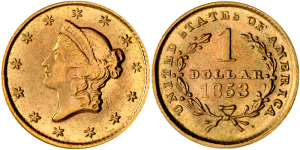 The 1853 Gold Dollar is the first coin from the series on our list for most-seen counterfeits at NGC. This year saw the highest mintage for the entire series with some 4,076,051 pieces struck. The high mintage means that this coin is often not inspected closely, making it easier for counterfeiters to pass their fakes. 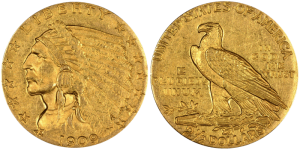 For the fourteenth coin on our list, we return to the most-counterfeited series: the Indian Head gold $2.50. Once again, the 1909 is by no means a rare date, but it is a slight conditional rarity in higher grades. This led to extensive counterfeiting of this date, especially in the Middle East in the 1970s. These older fakes are still submitted to NGC quite regularly. 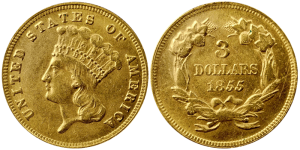 The 1855 is the second-most commonly counterfeited Indian Head $3, according to submissions to NGC. These, too, have been seen in the marketplace for decades and most likely originate in the 1970s or 1980s. They are usually the correct weight and gold content. Intended to deceive collectors of the day, they continue to trick collectors and dealers today.